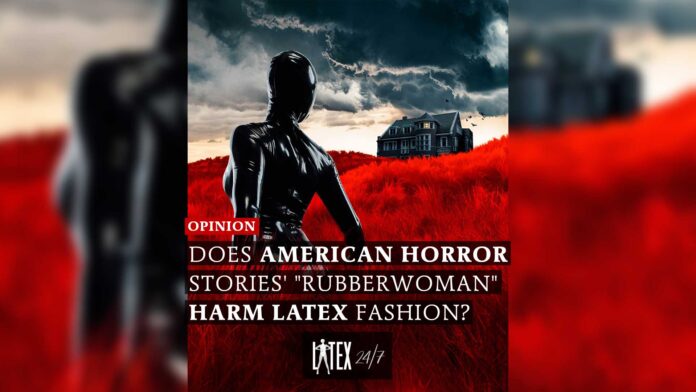 Hollywood and television media has a long history of including latex and rubber in their productions. From films like Girl in the Latex Web, Underworld, and The Matrix to the defining scene in Batman Returns where Selina Kyle becomes Catwoman and TV series’ such as Raised by Wolves, there have been many examples of the material being featured. American TV network FX has recently launched an American Horror Story spin-off series, American Horror Stories, and it welcomed back latex under the guise of “Rubberwoman”.

Did you know, you can now keep up to date with all the latest latex fashion news from Latex24/7 via the Google News App? Just head over to our publication or search “Latex24/7” in the app on your smartphone or tablet.

In the two-part opener, we are introduced to Scarlett (played by Sierra McCormick), a teenager struggling with her emotions, friendships and school. Scarlett and her two dads have just moved into a new home, a well-known building which has gained the name “Murder House”, and with good reason. Originally featured in series one of American Horror Story the house is the original home of the “Rubberman”, a character who has a tendency to murder inhabitants of the house. Scarlett finds the rubber suit hanging in a closet as it almost calls and beckons her. The teenager, obviously interested and intrigued, grabs the suit and, back in her room, is eager to quickly dress into it.

Upon wearing the garment, Scarlett is instantly “possessed” by it as she looks into the mirror. Her eyes blacken and she starts to see the reflection of the original Rubberman. Obviously scared, she removes the suit and throws it in the trash, only for it to reappear in her room later in the show.

Thinking that the suit has been returned by her dads, in an attempt to prank them, Scarlett dresses once more in the suit and surprises them in their bedroom, wielding a knife. As her parents confront her, she accidentally catches one of them with the knife, causing them to be cut. The teenager instantly regrets what happened and removes the suit hood, before apologising and being grounded. The show then moves onto the next day when we are introduced to a therapist who has been brought in to discuss some of Scarletts chequered “Internet history”. It is at this point that we learn a little of Scarlett’s past, during which she was kidnapped when she was 3 years old and then went missing for ten days. Upon leaving the session the therapist, Dr. Andi Grant (Merrin Dungey), is pushed down the stairs by the original Rubber Man and to her death.

The story then moves on to an altercation between Scarlett and four of her student colleagues who publicly humiliate her. She calls them to the Murder House and, donned once more in the rubber suit, murders each of them in the basement.

In part two of the series premiere, we are introduced to new character Ruby (Kaia Gerber). At the opening of the episode Rubber(wo)Man is at it again, being encouraged by Ruby, this time seen killing one of the ghosts already present in the Murder House. It’s clear that Scarlett gets a level of satisfaction from carrying out these deadly acts. Ruby turns out to be Scarlett’s ghost girlfriend and we hear the story of how Ruby was sold by her parents to a man who claimed to be her uncle. On her 16th birthday, Ruby is taken by him to see her biological parents, albeit from afar as he reveals the truth.

Towards the second half of the episode, Scarlett leaves her new home to attend a local Halloween costume party. Wearing the suit once more (sans hood), the character is certainly less hell-bent on causing chaos and causing misery. At the end of the episode, Scarlett decides to leave the Murder House and Ruby, and she is shortly seen to have tracked down Ruby’s “uncle”. The Rubber(wo)Man makes one further appearance and it’s pretty clear that Scarlett is out for revenge!

Whilst it’s always good to see latex on mainstream TV and media, does the portrayal of latex in American Horror Stories’ Rubberwoman actually help to raise the profile of the material, or does it ultimately harm the mainstream adoption and increase confusion in the general public?

On the one hand, it is clear that Scarlett’s first experience of wearing the suit fills her with intrigue and allows the character to feel empowered, a quality many associate with latex clothing and fashion. The inclusion of the Rubberman also goes to prove that latex can be worn by males as simply as the female gender. However, looking into the mirror for the first time, and seeing a reflection of the Rubberman, is a tense and spooky moment. And each of these scenes is filmed in a manner with which to highlight suspense, horror and fear. Combined with several jumpscares and eery, unsettling music, the Rubber(wo)Man and Rubberman segments are obviously designed to scare the viewer. The environment created is almost one of darkness combined with a level of macabre. Scarlett clearly has a violent streak and in addition to this, as we find out more and more about her past (her upbringing, her Internet search history, her introverted personality and characteristics), does this lead the audience to draw upon a specific stereotype of a person who wears latex?

Programmes such as Netflix’s Bonding did bring a light and comedic approach to the world of fetish but, even in that, latex was still shown in a world of BDSM. The AHS scenes in the latter half of episode two, in which the main character wears the rubber suit to the Halloween party, show a far more positive approach. Wearing the material, confidently, and in public does help to show the other side of latex fashion – something which can be accepted by others and empowering when worn. This is an ethos we here at Latex24/7 fully share. Maybe it’s time for Hollywood and television to change how they portray latex!

What do you think about the Rubberwoman in the opener of American Horror Stories? Do you feel it negatively affects latex fashion in the mainstream? What are your favourite examples of latex fashion in movies and television? Let us know your thoughts in the comments section below.

For more latex fashion news and reviews, be sure to check out our specially curated news section regularly.

Anoeses Launches “Out of This World” Latex Clothing Range