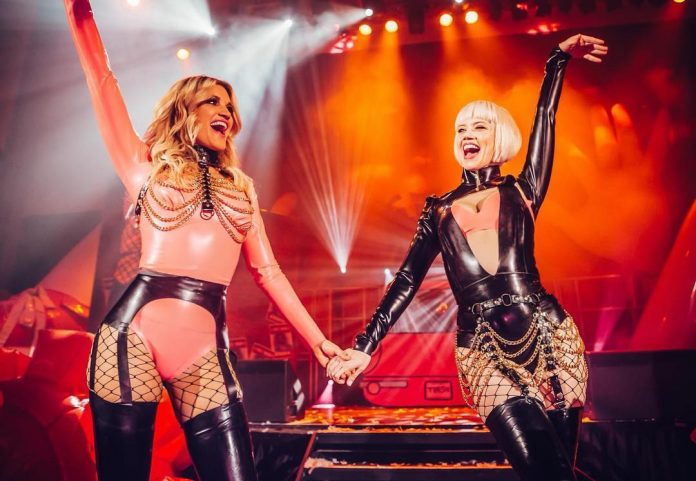 Launched in 2008, Sink The Pink has grown from its infancy at Bethnal Green working mens club to become one of the largest LGBTQ nights in the world, consistently selling out popular venues such as the Brixton Academy. Performing at their latest event, When I Grow Up, held at London’s Troxy club on 30th March 2019 were Pussycat Dolls Ashley Roberts and Kimberly Wyatt. Both performers took to Instagram to show off their choice of latex fashion, provided by William Wilde. The pair stunned in a contrasting set of pink and black latex garments individually designed by the world-renowned designer.

Always better together ☺️? living the ‘When I Grow Up’ dream @sink_the_pink with @iamashleyroberts ??♥️

Ashley opted for a pink bodysuit teamed with a set of black latex stockings and garter belt, whilst Kimberly wore an open front black latex bodysuit and pink bra also wearing a set of black latex stockings. The outfits were complimented by a set of golden chains providing a cohesion between the two performers outfits. Having both performed as part of the Pussycat Dolls, Ashley and Kimberly are no stranger to sexy outfits but we reckon these have to top the list. Kimberly is recently better known for her role on children’s television playing the role of Sasha Small in the BBC’s Almost Never Show, a comedy drama charting the rise of an all kids talent show.

Mr William Wilde also posted on Instagram showing the original sketch designs for the two contrasting outfits and also showed off a behind the scenes shot of the work in progress. As always, we love the outcome of his and the talented teams work.

When I grow up, I’d quite like to be a PCD actually.. ? #williamwilde at WILLIAMWILDE.COM #fabulous #fantasy #latex #fashion ? @kimberlywyatt @iamashleyroberts

What are your thoughts on the two Pussycat Dolls outfits? Let us know your opinion in the comments section below.

Versace Doubles Down on Latex in New SS 2022 Collection